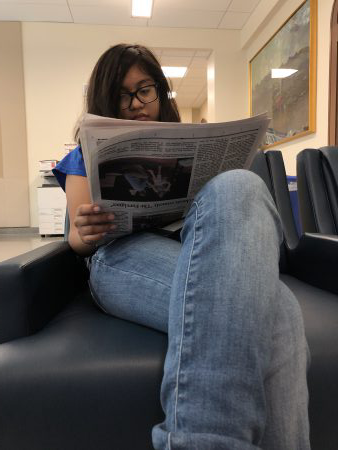 Sophomore Lorena Hernandez reads a newspaper in the commons of Franklin Hall July 17.

Looking around at all the journalists during the Opening Session at the High School Journalism Institute (HSJI), there are many students who have traveled a great distance or have returned from the previous year to learn and improve their journalistic abilities. Though all students who have decided to attend the institute share the common passion of journalism, there is a story behind what inspired them to be in that auditorium attentively listening to the director.

Lorena Hernandez is one of those inspired, attentive journalists sitting in the auditorium crowd being the only student from UIC College Prep High School who is attending the yearbook workshop. She decided to attend HSJI through the guidance of her school counselor … Read More »

Although Mia Morales is currently attending an institute for journalism, she finds herself more captivated with the works of law. Morales’ interest in law first sparked when her best friend, Khadijah Guisse, suggested she join the Mock Trials Club. Mock Trials Club are for students who enjoy a combination of acting, public speaking and law.

“Once a week we competed against other teams. I had a character in which I had to act out and read her statement,” Morales said. “Even though I had a character I had to stick to, I still have to know how to answer the questions.”

Looking ahead after college, Morales hopes to be a lawyer. Joining a club which is based around law implanted the idea for her future occupation. As a dedicated … Read More »