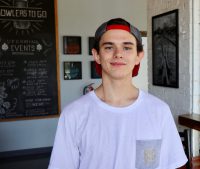 “There’s something about the authenticity of the Big Cheese that brought me in,” said Schultz.  “It is really family-like, and the hours are very flexible.”

The food truck phenomenon is nothing new in Bloomington, as day and night there’s an abundance of trucks downtown and on Kirkwood Avenue. Schultz explained that this high number of food trucks is connected with Bloomington’s pursuit of stronger bonds between the city and the food trucks.

“The food truck scene in Bloomington is so big because of the ordinances of the local city government,” Schultz said. “If you went to a place like Indianapolis, they have much stricter ordinances.”

However, in places like Fort Wayne, the buzz for food trucks is on the rise, due to a law passed in 2016 that legalized the use of food trucks in the area. Schultz is studying business administration at IU, and noted that one day pursuing a food truck career in a market like Fort Wayne could be very lucrative.

“I‘ve been thinking about that a lot,” Schultz said. “Starting my own food truck and just taking it out to another state.”

For now, Schultz will concentrate on finishing up his schooling and crafting cheesy delicacies at the Big Cheese food truck.