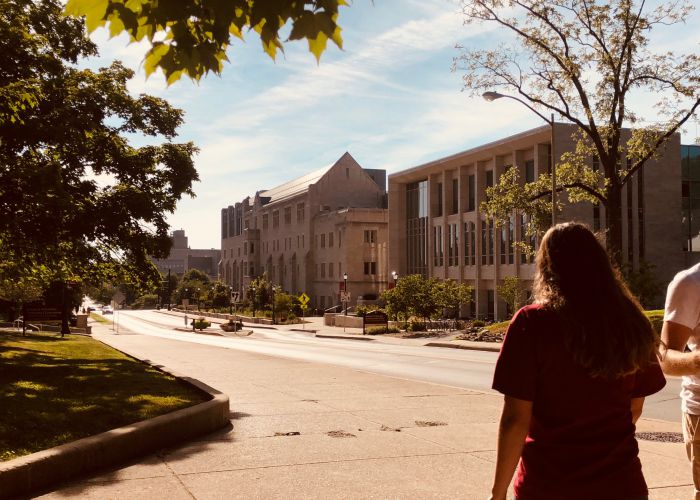 Counselor Tatiana catches the golden hour as she gives HSJI journalists a tour of the campus.             -Photo by Alexa Orozco

For Leah Hurwitt, Kayla Cruz, Kyla Ticer and hundreds of other students there was no better place to kick start their careers in journalism than at Indiana University. The girls are attending the High School Journalism Institute at IU where the program provides a number of workshops that concentrate on  journalism.

Ticer and Cruz both attend the feature writing workshop. They intend to help the community and report the truth with their stories.

Ticer, who funnels her journalism skills in an organization named Teamwork Englewood, said  “We write articles and we spread the word of what we’re doing and how we’re trying to change things in Chicago.”

Teamwork Engle, according to Ticer, aims to “revise the … Read More »

“Study abroad if you can, you’re never going to travel this way again,” said Jaedon Wilson, a senior at Indiana University Bloomington majoring in international relations with a minor in French and business.

Danielle Samek, senior adviser at the Indiana University in Bloomington’s Office of Overseas Study took time on July 11 to talk to the group of students at the college’s High School Journalism Institute about the growing interest in study abroad programs as well as the never ending academic and personal benefits that come from participating in these programs.

While it is important to look to future growth and benefits of study abroad programs, Samek pointed out that it’s equally important to note that IU has been a leader in overseas study since the first students and faculty took a walking tour of Europe in the 1800s.

Since that initial group … Read More »

Being a member of the LGBTQ+ community has been an uphill battle for me my whole life. I have a hard enough time being myself in my home country, so thinking about studying abroad can be quite frightening. Starting from the beginning I always had a hard time coming to terms with who I was. Bisexuality can sometimes be construed as a myth. People who don’t understand … Read More »

However strange they may sound, each of these peculiarities happens to be perfectly normal in the town of Night Vale. Dutifully reporting every new occurrence is Cecil Gershwin Palmer, the sole broadcaster at the local radio station. Despite the regular “disappearances” of his interns and the erratic behavior of his … Read More »

Chicago’s gun violence is seen as a gang-violence or gang related problem, when in reality it goes back to a educational problem. Chancelor Bennett, better known as “Chance the Rapper”, a grammy-award winning artist, in an interview where he donates one million dollars to Chicago Public Schools, and an additional ten thousand dollars to ten high schools, states “Today I am proud to announce that … Read More »

In Tucson, Arizona, Cooper sold out his show at the AVA Amphitheatre, for and old time rock artist the crowd did not seem to reflect the age of the artist. He didn’t just change the music of his time but he still finds ways to … Read More »

HSJI, the high school journalism institute at Indiana University held a press conference on July 11, 2017 at 7:00 pm, speaker Danielle Samek, senior study abroad advisor, told the students that studying abroad is safe. “The safety of our students while traveling abroad is of the utmost importance to the university.” If your number one priority is safety, then why are some people getting hurt? All I see on the news about students studying abroad is how they die and get injured. But then again, in a newsroom your worse day is their best day.

“With everything that is going on in the world, you can never ensure safety.” Samek walked around in her dark gray blazer.

The story of Queen Isabella is one that empowers young women today. Queen Isabella was such an inspiring character in history and the author, Kirstin Downey, does a great job in capturing the struggles and successes of Isabella living and ruling as a women in the 1400s.

“Isabella: The Warrior Queen” is a well researched biography that describes in great detail the life of Queen Isabella of Castile.

One thing that stuck with me throughout the story was how Isabella managed to hold power and create big change. Gender stereotypes and inequality have always been present and Downey writes how Isabella was originally thought to not be intelligent enough to rule. This didn’t stop Isabella though. With a Borgia connection and dedication she was able to achieve so many great things in her lifetime that others before her couldn’t.

A city street in Aix-en-Provence, France, one of IU’s most popular sites for studying abroad.

Something about the grandeur of “studying abroad,” the idea that an individual can experience the lifestyle of a completely different culture, has resonated with each incoming college class. Whether a plucky young architecture major wants to explore the columns of Rome, or a history buff longs to taste the salty air of the Mediterranean, overseas studies have an appeal for everyone. The ability to learn in such remarkable places is an opportunity that should not be taken lightly, but rather utilized and appreciated by all.

Such is the mindset of Danielle Samek, Indiana University’s Senior Study Abroad Adviser. Samek is heavily involved in the IU Office of Overseas Study, which serves as the university’s primary … Read More »

Twenty One Pilots’ album might be released sooner than you think

This graphic is on Twenty One Pilots’ website and may lead to a new album.

Twenty One Pilots has been teasing their fans since July 6th and fans are going crazy. Fans of the band Twenty One Pilots have been trying to put the pieces together after Twenty One Pilots, a band with a huge teenage fanbase, posted pictures of the lyrics with an eye. The black eye looks more like a sketch and has a red eyeball with the Blurryface, one of the band’s albums, symbol as the pupil. Every time a lyric is posted, the eye closes a little more. Many fans speculate that once the eye opens back up, Twenty One Pilots will release their new album.