By Jessica Kelly, Center Grove High School  |  July 12, 2016  |   Category: Public Relations Team
As many may know, the Media School will begin moving into Franklin Hall, July 25. Since 1954, the journalism department at IU has been stationed in Ernie Pyle Hall. This building, named after the famous journalist Ernie Pyle himself, holds a special meaning to IU students, faculty, and alumni. HSJI students (this week and next week) will be the last group of journalists to be taught in Ernie Pyle Hall. 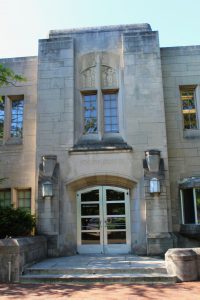 After next week, Ernie Pyle Hall will no longer be used to teach up-and-coming journalists.

In the Yearbook class, instructor Jeff Gabbard (and Janet McKinney who is not pictured) discussed the themes of yearbooks and what makes a good and bad yearbook with their students.

To “warm up” before the first session of the day, Web Packaging instuctor Denise Roberts led the class in some goofy stretches.

Many of the old classrooms that are not being utilized by HSJI are now empty, including the Nixon Newspapers Seminar Room.

After a lecture given by Tom French this morning, students had the oppportunity to ask hm questions afterwards. Julia Wunning from the Web Packaging Class was one such student.

In the Sports Writing class lead by Dean Hume, students learned about a statistic which says that 30 percent of students go to school and play sports amongst other activities along with their academics, while the other 70 simply go to school and go home right after.

Ernie Pyle Room 220, as pictured, has been filled with countless storytellers over the years, incuding authors, Pulitzer Prize winners, photogaphers, media specialists, and many, many more.